“One of our greatest sources of pride as Montanans is the world-class products grown, raised, or made here in the Treasure State, and we’re fortunate to have a trading partner and friend in Taiwan that recognizes the superior quality of our commodities,” Gov. Gianforte said. “By reestablishing our physical presence in Taipei, our producers and manufacturers will have even greater access to this important market, ushering in new opportunities for Montanans and the people of Taiwan.” 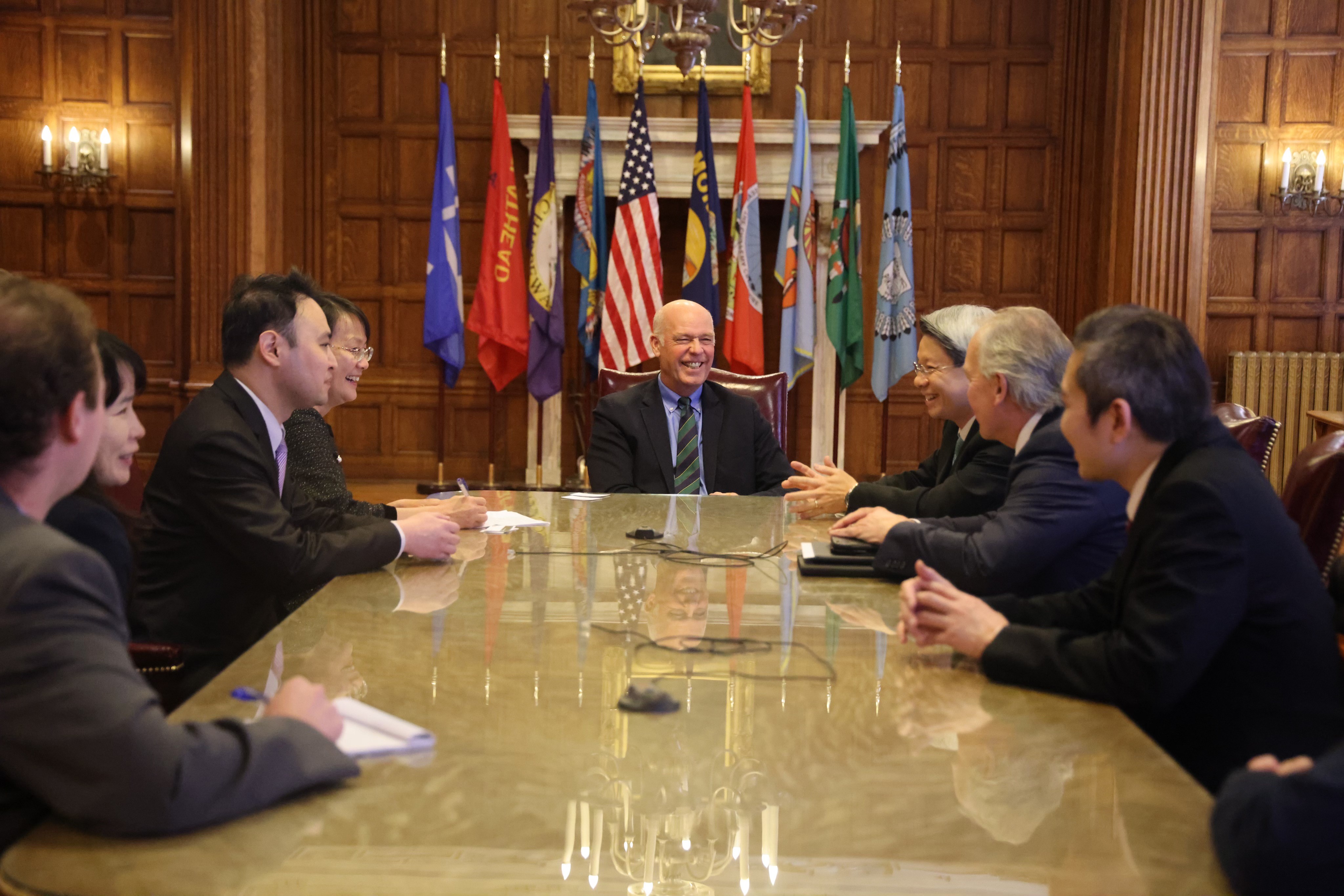 Gov. Gianforte welcomes Director General Chen and members of the Taiwanese delegation to the Governor’s Office prior to the ceremony in the Rotunda at the State Capitol.

Located in the heart of Taipei, the Montana Asia Trade Office reestablishes Montana’s presence in Taiwan to grow and expand trade in a critical region for the state.

In 2019 and 2020, Taiwan purchased more than $175 million of Montana goods, making it one of Montana’s largest trading partners. The Montana Wheat and Barley Committee recently estimated that over 70 percent of Montana’s wheat goes to markets in the Pacific Rim.

“We are gathering here today to pave the way seeking more export and market shares for Montanans. And now is perfect timing to arrange Montana’s market access for the post-pandemic era,” Director General Daniel Chen said. “I am proud to tell everyone here today, the friendships and partnerships will continue to carry on for decades and decades.”

“As we continue implementing the governor’s Montana Comeback Plan, we’re focused on forging relationships that will grow our economy and create greater opportunity for Montana businesses,” Commerce Director Scott Osterman said. “Commerce is thrilled to be managing the Taiwan Trade Office and looks forward to the opportunities and relationships this office will help create with one of our largest trading in a critical region.”

Mei Mei Wang, who led the state’s office in Taiwan prior to its abrupt closure in 2012, will serve as the official representative to the Montana Asia Trade Office in Taipei.

“Agriculture is Montana’s biggest economic driver, and in Montana, we produce some of the best beef, wheat, barley and other commodities in the world. I applaud Governor Gianforte’s work in establishing this new Taiwan Trade Office that will strengthen the partnerships that our farmers and ranchers enjoy with the Taiwanese.  I look forward to this new office opening even more doors and new markets for Montana ag,” Senator Steve Daines said.

“I’m pleased to see Montana reopen its Taiwan Trade Office after its sudden closure in 2012. Taiwan and Montana have benefitted from a positive trade relationship for years now,” Representative Rosendale said. “The return of this office will further assist Montana farmers and ranchers to ensure their products get to market in a more efficient manner, while allowing Montana to benefit from Taiwan’s electronic exports. Governor Gianforte and Montana’s Department of Commerce deserve a lot of credit for the great work they’ve done in facilitating the office's return.”

“I’m grateful to General Chen and the Taiwanese people for working with Montana to reinvigorate our trading partnership,” Senator Tester said. “Montana grows some of the best ag products in the world, and Taiwan produces some of its most cutting edge technology. We’re both better off when we’re working together, and I’m excited to see what this relationship will bring to the Treasure State.”

Tags: Jobs and Economy, Government Working for You